Apache Traffic Server is currently on a two year major release cycle. At any given time, we guarantee to have two major versions supported. Please refer to our download page to see the current supported versions.

For details on the actual developer release process, See 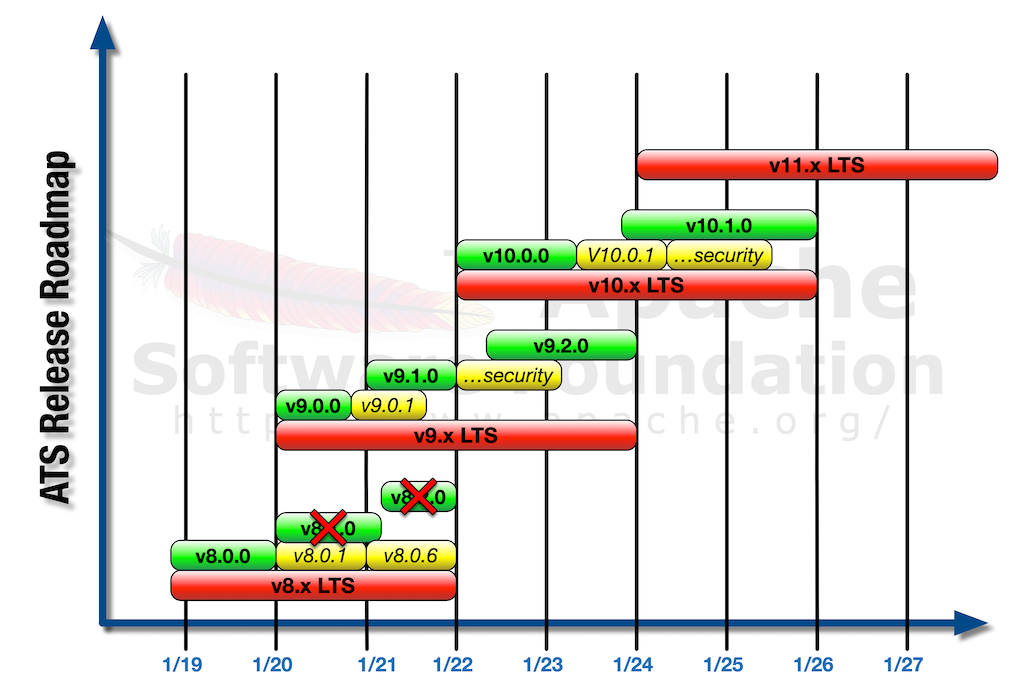 Note: These are examples, only the first minor release number of each major LTS branch is guaranteed to be made. The dates for point releases are also for illustration.

As you can see, we no longer make any sort of development releases. Also, there’s no longer a backport voting process! The latter means that all developers and users must make a higher commitment to reviewing changes as they go into master and the incompatible release branch. Other than that, it’s pretty much business as usual, but easier for everyone involved. This git branch diagram shows an example how the git tree will be managed:

Burning release numbers, or how our release process works¶

When we upload a tar ball to VOTE on as a new release and it does not work out, because something is broken and needs a code-change we will not reuse the version number. The rationale behind this is the process which guarantees that what we release and what’s in the tree is also what everyone has seen so far and no code is sneaked in.

If for instance we had a release candidate trafficserver-4.1.4-rc1.tar.bz2 (note the rc1 at the) end, and that vote passed, we’d re-roll the tar-ball to make sure it will simply be called trafficserver-4.1.4.tar.bz2. But now all sha1 and md5 sums as well as the GPG signature would also be different. That’s the perfect opportunity to smuggle in some code that no one will bother to review any more.

Therefore when creating a new release the first thing we do is create a signed tag and push it. That way everyone can compare that signed tag with the signed tar-ball that we create from the tag and upload it (usually to people.apache.org).

Now, when we notice an issue that needs a code-change, we make that on master, cherry-pick it to the release-branch (optional), and create the new tag.