This chapter provides a foundation for designing and writing plugins. Reading this chapter will help you to understand:

This chapter has provided an overview of Traffic Server’s HTTP processing, API hooks, and the asynchronous event model. Next, you must understand the capabilities of Traffic Server API functions. These are quite broad:

Below are some guidelines for creating a plugin:

Traffic Server is a multi-threaded process. There are two main reasons why a server might use multiple threads:

Traffic Server uses multiple threads for the first reason. However, Traffic Server does not use a separate OS thread per transaction because it would not be efficient when handling thousands of simultaneous connections.

Instead, Traffic Server provides special event-driven mechanisms for efficiently scheduling work: the event system and continuations. The event system is used to schedule work to be done on threads. A continuation is a passive, event-driven state machine that can do some work until it reaches a waiting point; it then sleeps until it receives notification that conditions are right for doing more work. For example, HTTP state machines (which handle HTTP transactions) are implemented as continuations.

Continuation objects are used throughout Traffic Server. Some might live for the duration of the Traffic Server process, while others are created (perhaps by other continuations) for specific needs and then destroyed. Traffic Server Internals (below) shows how the major components of Traffic Server interact. Traffic Server has several processors, such as cache processor and net processor, that consolidate cache or network I/O tasks. Processors talk to the event system and schedule work on threads. An executing thread calls back a continuation by sending it an event. When a continuation receives an event, it wakes up, does some work, and either destroys itself or goes back to sleep & waits for the next event. 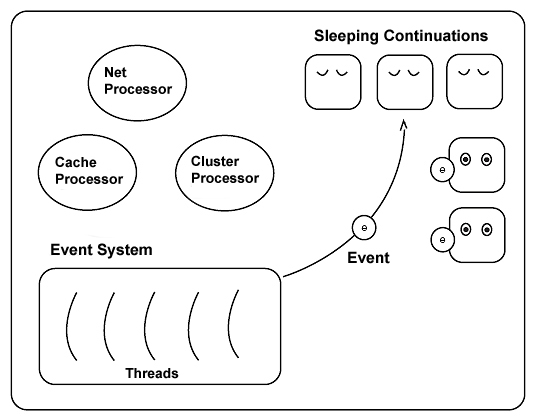 Plugins are typically implemented as continuations. All of the sample code plugins (except hello_world) are continuations that are created when Traffic Server starts up; they then wait for events that trigger them into activity.

Traffic Server performs sophisticated HTTP caching and proxying. Important features include checking for alternates and document freshness, filtering, supporting cache hierarchies, and hosting. Traffic Server handles thousands of client requests at a time and each request is handled by an HTTP state machine. These machines follow a complex state diagram that includes all of the states required to support Traffic Server’s features. The Traffic Server API provides hooks to a subset of these states, chosen for their relevance to plugins. You can view the API hooks and corresponding HTTP states in the HTTP Transaction State Diagram.

The example in this section (below) explains how a plugin typically intervenes and extends Traffic Server’s processing of an HTTP transaction. Complete details about hooking on to Traffic Server processes are provided in Hooks and Transactions.

An HTTP transaction consists of a client request for a web document and Traffic Server’s response. The response could be the requested web server content or it could be an error message. The content could come from the Traffic Server cache or Traffic Server might fetch it from the origin server. The following diagram shows some states in a typical transaction - specifically, the scenario wherein content is served from cache. 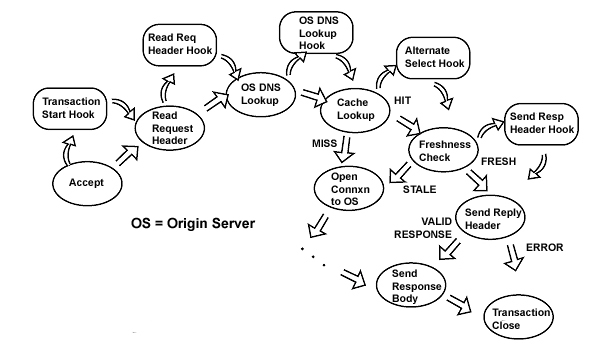 You use hooks as triggers to start your plugin. The name of a hook reflects the Traffic Server state that was just completed. For example, the “OS DNS lookup” hook wakes up a plugin right after the origin server DNS lookup. For a plugin that requires the IP address of the requested origin server, this hook is the right one to use. The Blacklist plugin works in this manner, as shown in the Blacklist Plugin diagram below.

The Blacklist plugin’s hook to the origin server DNS lookup state is a global hook, meaning that the plugin is called every time there’s an HTTP transaction with a DNS lookup event. The plugin’s hook to the send reply header state is a transaction hook, meaning that this hook is only invoked for specified transactions (in the Blacklist Plugin example, it’s only used for requests to blacklisted servers). Several examples of setting up hooks are provided in Header-Based Plugin Examples and HTTP Transformations.