If you do not want all requests to go to the parent cache, then simply configure Traffic Server to route certain requests (such as requests containing specific URLs) directly to the origin server. This may be achieved by setting parent proxy rules in parent.config. 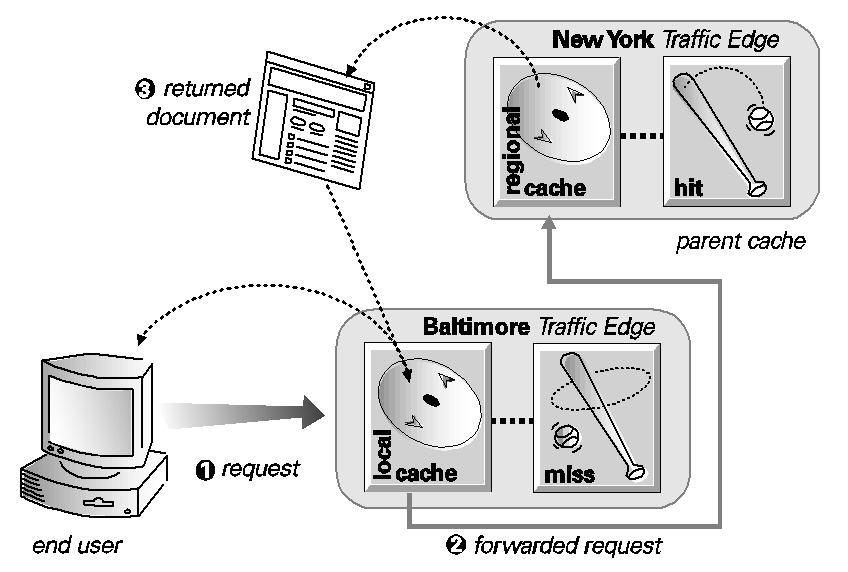 If the request is a cache miss on the parent, then the parent retrieves the content from the origin server (or from another cache, depending on the parent’s configuration). The parent caches the content and then sends a copy to Traffic Server (its child), where it is cached and served to the client.

There are several parent selection policies available to the Traffic Server child node.

If remap rules are required (proxy.config.reverse_proxy.enabled), when a request comes in to a child node, its remap.config is evaluated before parent selection. This means that the client request is translated according to the remap rule, and therefore, any parent selection should be made against the remapped host name. This is true regardless of pristine host headers (proxy.config.url_remap.pristine_host_hdr) being enabled or not. The parent node will receive the translated request (and thus needs to be configured to accept it).

The client makes a request to Traffic Server for http://example.com. The origin server for the request is http://origin.example.com; the parent node is parent1.example.com, and the child node is configured as a reverse proxy.

If the child’s remap.config contains

with the child’s parent.config containing

and parent cache (parent1.example.com) would need to have a remap.config line similar to

With this example, if parent1.example.com is down, the child node would automatically directly contact the origin.example.com on a cache miss.

Traffic Server supports use of several parent caches. This ensures that if one parent cache is not available, another parent cache can service client requests.

Configuring Traffic Server to Use a Parent Cache¶

To configure Traffic Server to use one or more parent caches, you must perform the configuration adjustments detailed below.

You need to configure the child cache only. Assuming the parent nodes are configured to serve the child’s origin server, no additional configuration is needed for the nodes acting as Traffic Server parent caches.

The following example configures Traffic Server to route all requests containing the regular expression politics and the path /viewpoint directly to the origin server (bypassing any parent hierarchies):